We Can Become "Trees Of Life".

Are You Ready For The End Of The World?

Well, if you are reading this, then another apocalyptic prediction has come and gone and been proven to be without merit. Now all you have to worry about is the impending "fiscal cliff" and paying off all those Christmas gifts you charged to your Visa.

I've had the pleasure of surviving several of these world-ending predictions. The world was I supposed to end three days following my thirteenth birthday on March 10, 1982. It was called the "Jupiter Effect" It frightened the living daylights out of me at the time, spoiling the milestone of entering my teenage years. The planets were supposed to all line up on the same side of the sun, provoking a gravitational pull that would wreak havoc here on Earth. Turns out that the only wreaked havoc occurred inside the mind of a teenage boy who laid awake all night begging forgiveness for every sin ever committed by every human being who ever lived.

Nearly twenty years later came Y2K. We had been told that the computers of the world would not be able to handle the two zeros at the end of the year 2000. The world was supposed to be plunged into utter chaos. I was preaching for a small congregation in the Northwest at the time and recall a well-meaning, yet frightening individual phoning the church office one morning. She asked if I had prepared the church for the impending invasion? She went on to inform me that alien beings were currently hiding out in the Olympic Mountains and on Saturday, January 1 would overtake our small town and steal our food supply. I politely thanked her for the warning and invited her to worship with us on Sunday, January 2. She hung up on me. I never heard from her or the aliens again.

On June 6, 2006 we were supposed to experience the full manifestation of the antichrist himself Religious nuts the world over were predicting that 06/06/06 was the date of the devil. He and his army were to show up and start destroying stuff and stealing souls. Working for a major retailer at the time in customer service, I experienced a few individuals who certainly acted like the antichrist, but I doubt any of them to have been the real thing.

Then came 12/21/12. Some South American Indians who have all been dead for 1800 years apparently created a calendar that only went to 12/21/2012. Consequently, on that date volcanoes are to l erupt and meteorites are to bombardlus and all that good stuff. I am predicting here on 12/19/2012 at 2:23 AM that this will all be yet again another false alarm.

What is genuinely sad about all of this is the collection of conversations l’ve had with folks who absolutely refuse to give the Bible any credence. They will not read it. They will not heed it. It's too strange. It's too hard to understand. But those same folks will buy into a calendar created a million lifetimes ago by a society that believed in eating bird manure for breakfast and sacrificing young girls to the sun god. Go figure!

Please read Matthew 24:36. You should know that God the Father, and He alone, is in charge of world-ending events, If you are obeying his instructions, then you are ALWAYS ready for the world to end and have not a thing to worry about.

We welcomed Travis Williams on 12/23.  Travis is our own young man from Woodsfield.  He now serves as the Family Life minister at the Belpre Church of Christ.

Next Sunday, December 30th, Brother Woody Biggs will be speaking for the Sunday morning service. 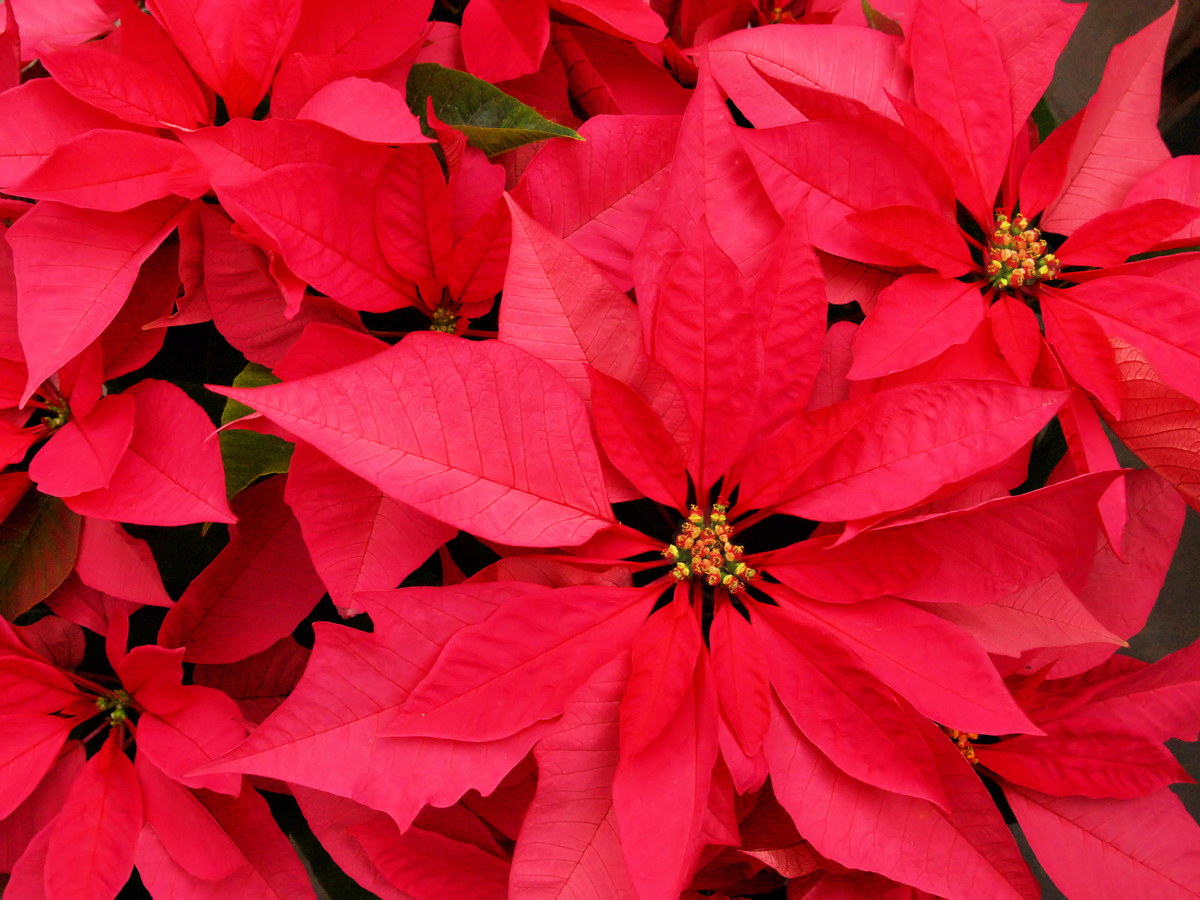 A reader of a church publication has written a letter to the editor inquiring about the legalities of placing Poinsettias around the church building during the holiday season.  the questioner is quite obviously opposed to the idea, and is using this format to express his discontent with all of the liberals in the church.

For those of you wondering why some congregations in the brotherhood are dead or dying -- this "poinsettia question" provides your answer.

Too many Christian families are falling apart.  Young people, described as having been raised in the church, are jumping out of our churches as if the buildings are on fire.  Sexual promiscuity is absolutely rampant and even bragged about amongst the brethren.  The devil is at the door!  People are broken and no one is trying to mend them.  Widows and widowers are lonely and no one is trying to comfort them.  An alarming number of church leaders' lives are void of Christ-like attitudes and behaviors.  Our neighbors souls are lost!  But we don't have mental energy to be concerned about all of this because we are too worried and upset about Poinsettias in the church building!  Who has time to battle the devil when we have to be so on guard against the evil florist who's trying to make God's house "too Christmasy"?

Satan must be in his glory when he heads us distraught about Christmas foliage.  "Let them argue about such things," he says to his angels.  "Let them pick at each other about carpet color, building size, communion tray style, and floral arrangements.  Meanwhile, we'll sneak in the back door and pick them off one soul at a time."

Brethren, if these inane, insignificant things are going to be what we fuss about, then we deserve every problem that befalls us.  we deserve every broken home, every broken church, every broken eldership, and every broken preacher!  A church can only strain on so many gnats and swallow so many camels before it eventually chokes to death.  When you get a chance, you should read the story of Jonah (Jonah 4:5-10).  You'll learn that Jonah would have been much more at peace had he as much concern for lost souls as he did the plants and worms.

There are two parts to the Gospel:
Believing It and Behaving It.

Tips To Make The Season Brighter

Some good advice that should keep you in the right frame of mind during this holiday season.

• Prepare your soul for the holiday. Spend not so much on gifts that your soul is forgotten.
• Don’t burden the shop girl, the mailman, and the merchant with complaints and demands.
• Give yourself with your gift. This will increase its value a hundredfold. And he who receives it  shall treasure it forever.
• Do not value gifts received by their cost. Even the least expensive may signify love, and that is more priceless than silver and gold.
• Do not neglect the needy. Share your blessings with many who will go hungry and cold unless you are generous.
• Do not neglect Christ’s church. To neglect church services for secular celebrations makes a mockery of the holiday.
• Keep a childlike spirit. Not until you have become in spirit as a little one are you ready to enter into the kingdom of Heaven
• Give your heart to Christ. Let Him be at the top of your wish list.

The Best Gifts To Give

Just this once, Lord, I want to come to you with no problems, but simply to say, Thank You:

For your forgiveness when I fail.
For the sheer joy of sleep when I’m terribly tired.
For the silent strength of humility when pride overtakes me.
For the justice of your laws when men are cruel.
For the remedies for sickness when I am ill.
For the simplicity of orderliness when I face confusion.
For the assurance that you have made a place especially for me when I feel inadequate among my peers.
For me joy of helping others when I see people in need.
For the earthly evidences of your will when I’m trying to find out what life is all about.
For the reality of your world, when I stray too far into fantasy.
For the rightness of reasonableness when I panic too quickly.
For the fun that refreshes when everything gets too serious.
For the renewal in moments of silence when I’m dizzy being busy in a hectic world.

Commandments for a Happy Church

1. Speak to people. Speak to everyone, especially to those whom you don’t know. There is nothing quite so nice as a cheerful word of greeting.
2. Smile at people. lt takes 72 muscles to frown and only 14 to smile. Your smile is one of your finest assets. Use lt! lt doesn’t cost a thing!!
3. Call people by name.  The sweetest music to any person’s ears is the sound of his or her own name. lf you don‘t know the person’s name, introduce yourself and likely the person will respond with his or her name.
4. Be friendly and helpful. lf you want friends, learn to be a friend. Everyone needs them. No one has too many.
5. Be cordial. Try to speak and act as if everything you do is a genuine pleasure.
6. Be genuinely interested in people. Try to like everybody and everybody will like you. Do not limit yourself to a few friends then there are so many likable people about you.
7. Be generous with praise. And be just as sparing with criticism.
8. Be considerate of the feelings of others. Usually, there are three sides to a controversy: yours, the other person’s, and the right one. Try to see them all.
9. Be alert to give service. What we do for others counts most in life. Try giving yourself away.  It’s fun!
10. Develop a sense of humor. To this good sense of humor, add a generous dose of patience and a dash of humility. Then get ready to receive many blessings. They’re sure to come!

Facts About Our Capital

When one considers how irreligious and how offended by Christianity some of our country's leaders are, the following facts are astonishing.

As you walk up the steps to the building which houses the U.S. Supreme Court you can see near the top of the building a row of the world's law givers and each one is facing one in the middle who is facing forward with a full frontal view - it is Moses holding the Ten Commandments.

As you enter the Supreme Court courtroom, the two huge oak doors have the Ten Commandments engraved on each door.

Above the seats of the Supreme Court Justices is a display of the Ten Commandments.

There are Bible verses etched in stone all over the Federal Buildings in Washington D.C.

Every session of Congress begins with a prayer by a paid preacher, whose salary has been paid by the taxpayer since 1777.

Patrick Henry, a founding father of our country, once said, " It cannot be emphasized too strongly or too often that this great nation was founded not by religionists but by Christians, not on religions but on the Gospel of Jesus Christ."

My Thanks to Glenda Thomas for inspiring this article.
~ C. Shultheisz